As introduced in the previous guide, FLOW features a REST API and data sinks that allow third-party applications to request outputs of any operators in various forms.

Any HTTPS agent is able to communicate with FLOW’s servers using its API, which conforms to the style and constraints of REST. The message bodies use the JSON syntax. This document describes the resources and methods that your applications can use. They will be expanded in the future.

In case of an error in communication or processing, FLOW blocks always respond with the relevant HTTP status code and error object in the response’s body. See the error reference for details.

All communication with the REST API uses the HTTPS.

All HTTP messages containing a JSON body must include the Content-Type: application/json header.

FLOW API uses versioning that is different from Insights and Block versions. API version defines what each party is able to communicate and receive. It has the structure of <major version>.<minor version>, e.g. 3.17.

All HTTP requests towards the block must include the Accept-Version header with the API version number that the client supports. Example:

This version must be the same or higher than the block's version (but still within the same major version). If it's not, the block will respond with the api_version_mismatch error to all requests except the block info requests. The purpose of this check is to warn all users of the API when there have been changes causing potential incompatibility with their current application.

(SW versions actually have a third number, but its increase will never cause any change in API, so it's been omitted here.)

The block's current version can be obtained from the block info request below. This request doesn't need to contain the Accept-Version header.

The presence and contents of the Accept-Version and Authorization headers are not checked while processing this request.

Accessing most of FLOW's resources requires your authentication. Ask the block's administrator to create an account for you. You can then authenticate by following these steps:

The access token will mostly be the same for your account, but an administrator might manually change it at any time. In such a case, further requests with the old API key will return the 401 error code.

The access_tokens array contains the tokens you need to use in all following communication to authenticate as the user demo_stream.

It's also possible to find out your access token through FLOW Insights on the My account page. 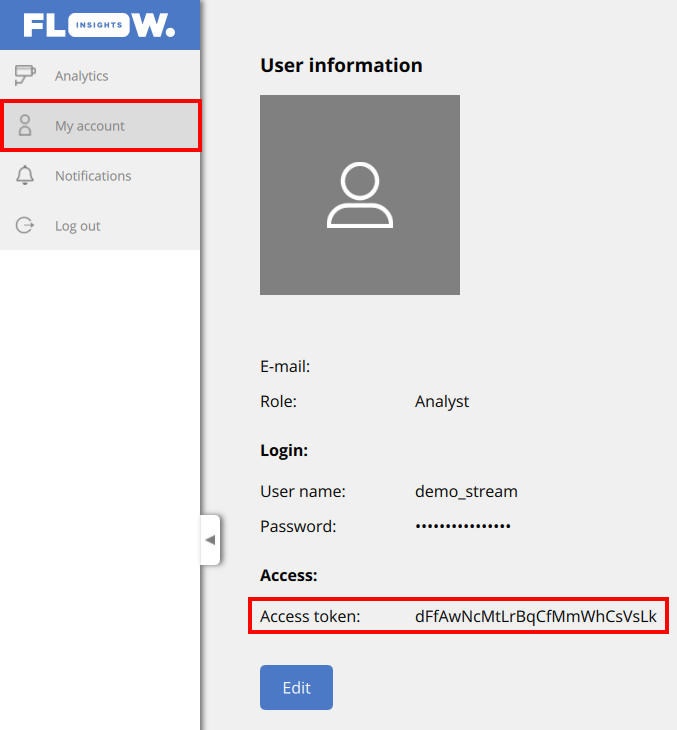 Cubes refer to FLOW cubes described in the architecture article.

The sequence_number is very important. You can look at it as the cube’s version—every time someone changes the cube, the number gets incremented. Such changes include adding, removing, or changing an analytic or a camera. A correct sequence number is required in requests to change the cube. That's how the server makes sure you know its current version. Note that the sequence number will always be a string.

Analytics are technically processed by blocks, but analytics always work with data from only one cube. That’s why in this hierarchy they belong under individual cubes.

The sequence_number here is tied to the analytic, not the cube, and thus may have a different value. It increments only when the analytic (or something it contains) changes. You need to know the analytic's current sequence number in requests like obtaining trajectory counts shown later.

There is information about the trajectory cache. Cache size (cache_capacity), current trajectory count (cache_count) and timestamp from which all detected trajectories are cached (cache_start_timestamp). Timestamps of first and last trajectories present in the cache are provided as well. Furthermore, features configured in analytics settings such as camera location and georegistration state are returned together with current analytics state: processing or idle.

If the analytic isn't tied to a PTZ camera, the home_position and home_tolerance will be hidden. If it is, the objects contain information about the position that must be reached by the camera in order for the analysis to take place. If the camera is out of this position, analytics will be paused.

Returns the current camera image for the corresponding analytic. Camera images are updated every 30 seconds.

It’s possible to receive trajectory counts sorted into traffic object categories for the whole scene. Include the analytic's current sequence number in your request.

See how you can request outputs of existing REST sinks in the next article.

Not sure how to do it or have some questions? Contact us!